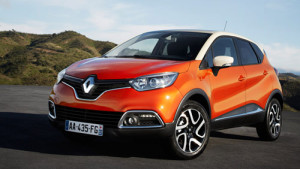 The all-new RENAULT CAPTUR Crossover is the marque’s latest addition to its fresh and diverse model line-up and set to be a serious contender in South Africa’s very popular and highly competitive B-segment small utility vehicle (SUV) category.

While the beautifully practical Captur crossover has the attributes of a standard SUV, it embodies so much more. Combining the personality of a SUV and the spaciousness of an MPV with the dynamism of a hatch, new Renault Captur crossover is the ultimate all-in-one package. Competitively priced, the entry-level Expression 66kW Turbo carries a price tag of just R219 900.

An easy-to-drive, multi-functional and -faceted crossover that strikes the ideal balance between beautiful design and practicality, Captur offers a choice of bi-tone body colours (Dynamique models only) and 16” and 17” alloys rims as standard on Expression and Dynamique variants respectively. Super-stylish, curvaceous lines are complemented by the chrome-plated Renault diamond set into the imposing black grille as well as the front LED lights already mentioned.

With its flexible, modular layout, Captur’s interior is spacious – as is the boot area – which houses hidden, yet easy-to-access storage space. Immediately eye-catching are the innovative shell-shaped seats which feature trendily designed, practical zip collection covers (on Dynamique models) that are easily removed and washable. Leather seats are an option on the Dynamique 88kW EDC variant.

Renault Captur comes to market in South Africa with a proven European track record. Following its international debut at the 2013 Geneva Motor Show, the crossover launched in France in April that year. While the sales tally for the nine months to end-December 2013 totalled an impressive 94 000, a further 161 000 Capturs found homes with very happy owners in Europe during 2014.

Renault Captur continues to be a global success for the brand – success that Renault South Africa is confident of emulating in the local market. For those spirited, searching individuals who appreciate the finer things, simply love life and savour every moment of it, the new Renault Captur crossover is the perfect lifestyle complement.

THE CROSSOVER THAT HAS IT ALL

Described by one European journalist as “a compact crossover combining 4×4 looks with supermini dimensions”, with its SUV-styling and persona, MPV-like practicality and the dynamism offered by a hatch, Renault Captur is sure to have great appeal for SA motorists.

The first manufacturer to introduce Turbo technology to F1 in 1977, Renault’s engineers have adapted their tools and talents used to design powerful, efficient and reliable F1 power plants to develop technically advanced engines for production cars. A host of features resulting from this technology transfer are now a Renault road car standard with benefits that include low inertia turbo, high tech surface treatment of engine components to reduce friction and optimisation of the engine’s internal dynamics to afford better combustion.

As a direct result of its extensive F1 expertise gained over the past 38 years, Renault is the most advanced brand globally in respect of engine downsizing, with no compromise on power and performance.

The Captur Expression and Dynamique 5-speed manual derivatives are fitted with Renault’s new generation 66kW Turbo petrol enginewith overboost. This serves to underscore the fact that access to highly efficient and technologically advanced engines is no longer the preserve of more expensive vehicles.

DESIGN AND PRACTICALITY: INSIDE AND OUT

Clearly derived from the concept car revealed in Geneva in 2011, Captur is modern and stylish with curves in all the right places. With its ground clearance of 170mm and elevated driving position, Captur has a bold presence.

An easy-to-drive, multi-functional and multi-faceted crossover that strikes the ideal balance between beautiful design and practicality, with the Dynamique variants, Captur offers a choice of bi-tone body colours.

With chrome and gloss interior finishes, quality and innovation abound throughout the cabin’s flexible and modular MPV-like layout. Immediately eye-catching are its innovative shell-shaped seats which boast trendily designed, practical zip collection covers (Dynamique only) that are easily removed and washable. While a leather steering wheel is standard on the Dynamique derivatives, leather seats are also an option on the Dynamique EDC variant.

Easy-access handles effortlessly slide the rear bench seat forward (by up to 16cm) and it can also be folded flat. The maximum capacity of the boot as seen when opening the hatch door totals 377 litres split by an innovative two-position boot floor with its cleverly hidden yet easy-to-access storage area. With the rear bench seat pushed to its forward most position, the overall capacity increases to 455 litres. With the rear seats folded down, the total maximum boot space measures a substantial 1 235 litres.

In the two Dynamique models, the boot floor is reversible: smooth on one side with an anti-slide surface on the other.

SMART TECHNOLOGY AT EVERY TURN

With smart technology at every turn, Captur boasts a host of fitments and features that exceed the standard in its market segment.

Super-smart, like all its Renault siblings, the Captur crossover offers Bluetooth® connectivity which enables safe, convenient and hands-free telephony and music streaming from external devices when on the go. Renault’s MediaNav integrated on-board multimedia system with 7” touchscreen is standard. Satellite navigation and Arkamys radio plus USB port are included in the price tag with every feature easily accessed via fingertip controls conveniently located alongside the steering column.

ECO mode function is available at the push of a button and electronically modifies the engine’s response to automatically optimise fuel consumption (by up to -10%).

Smart technology that crosses over into the safety arena is the cruise control + speed limiter, a feature onallthree Captur models. To ensure a more comfortable and safer drive on highways and open roads, the system electronically maintains a steady speed as set by the driver.

Safety is synonymous with the Renault brand and, with an unrivalled safety package standard across the Captur range, the newcomer achieved a 5-Star Euro NCAP rating in 2013, the 15th Renault model to do so.

The Anti-Lock Braking System (ABS) coupled with Emergency Brake Assist (EBA) kicks in and automatically applies maximum brake pressure when an emergency braking situation is detected and is able to shorten braking distance by up to nine metres.

The Electronic Stability Program (ESP) ensures vehicle stability and assists the driver to avoid possible loss of control resulting from excessive speed or slippery road conditions. It detects and reduces loss of traction, reduces engine power and brakes on independent wheels in the event of loss of control.

Hill Start Assist (HSA) is automatically activated (upon complete stop) as soon as an incline of at least 10% is detected. The system is engaged by stepping firmly on the brake and prevents any backward movement long enough for pull off without requiring the use of the handbrake. When stepping off the brake, the car will hold for approximately three seconds to allow pull off with no roll-back.

In the two years since its global launch in April 2013, the Renault Captur crossover has racked up a raft of European accolades including 2014 Best Small SUV and Car of the Year 2013 (awarded by the French Association of Automotive Press).

Pundits are predicting that the all-new Renault Captur will find favour in the local market and perform equally as well on South African roads.